I like to pass around a basket of assorted breads with a large meal. On Thanksgiving, I make a tray of cornbread and apple bread, cut them up into slices or large squares and place them in a breadbasket. If … END_OF_DOCUMENT_TOKEN_TO_BE_REPLACED 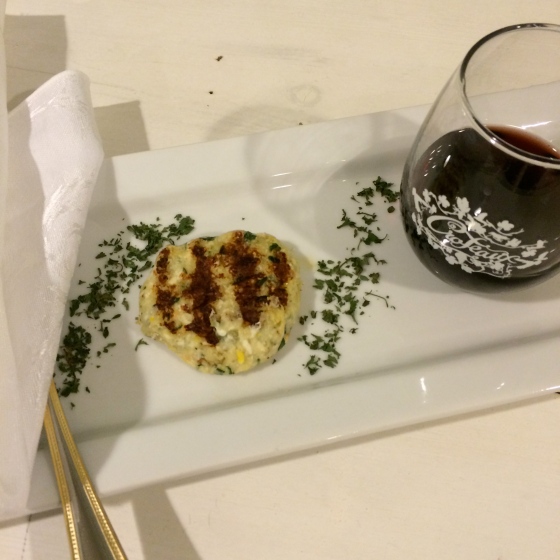 With Thanksgiving only nine days away, preparation and organization is key. Especially when, like many of us, we are trying to juggle more than we can be done in any given day, unless of course you require no sleep whatsoever. For this reason, I try to prepare some foods that can be made ahead and frozen without compromising the flavor.

Two weeks ago, I made tiroptia – triangle cheese pies – to serve as an appetizer, and I froze them. I often do this and have them on hand when unexpected company comes, or we decide to have an impromptu gathering.

Today, I made corncakes, which I plan on serving as a side dish. I happened to come across the Food Network TV show, Giada at home, and she made corncakes with smoked mozzarella. The method was quick and easy, and I decided to make them one evening when I had a crowd over for dinner.

Everyone loved them, and they especially enjoyed the smell and taste from the smoky flavor of the mozzarella. I, on the other hand, thought they were just okay. Don’t get me wrong – Giada can do no wrong in my eyes. She’s my celebrity chef idol, but I wasn’t sold on the smoked cheese.

I like my corncakes on the sweet side, so I decided to try my hand at my own recipe, tailored to my tastes. For Thanksgiving, I’m serving both Giada’s smoked corncakes and my sweet corncakes. I’ve already prepared and frozen the patties, and I’ll grill them the morning of Thanksgiving and heat them in the oven warmer before serving them. Freezing is recommended regardless of when you plan to serve them. It helps to keep the patty from falling apart when grilled.

2 cups corn (preferably fresh off the cob, or thawed frozen)

In a food processor, pulse the corn into a puree. Do not over process. There should be some texture to the mixture. Transfer to a medium sized bowl. Add the cheese, breadcrumbs, chives, cilantro, Greek yogurt, honey, salt and pepper. Stir until combined. To make the patties, form into balls a little larger than golf balls. Flatten to form the patties. Place in an airtight container and freeze. Spray oil spray on grill or brush oil on the grill grates. Grill until browned and cooked through, about 5 minutes on each side.

There are certain foods you make for holidays year after year. It may be something you only make once or twice a year, so your family and guests look forward to it. For instance, the stuffing recipe that I shared with you in my last post — if that didn’t make its way to my Thanksgiving table there would be a lot of unhappy faces and censure over breaking tradition. But as eating habits have changed over time, so must the menu.

The chestnut stuffing recipe makes no claims to be low fat. In fact, it’s quite the opposite. So to balance it out, this year I’m taking out a very beloved cauliflower recipe I’d made for years with another healthier one.

The one I’d made before had butter, cream and Swiss cheese. If I was eating nothing else, I could eat a large plate of it. However, with all the other foods, particularly that stuffing, which I crave, I only could manage a taste.

This year, I will be roasting the cauliflower, and no one will miss the fatty cream and cheese because I am seasoning with flavorful herbs and spices. I know my daughters will be happy. They don’t enjoy the fatty foods and prefer the vegetables in their natural state, and not drowning in a creamy sauce.

Please, don’t limit yourself to cauliflower. There’s a world of delicious vegetables available. You can roast broccoli, peppers, carrots, or any other root vegetable. It’s so easy and there’s no fuss.

2 pounds multi-colored potatoes, or any variety

Or the vegetables of your choice

*I doubled the seasoning recipe since I was making cauliflower and potato and carrots.

Using two separate large bowls, fill one with the cauliflower and the other with the carrots and potatoes. Drizzle each with olive oil and toss thoroughly to coat. If the cauliflower is extra large, you may need to add another tablespoon of olive oil to coat evenly. Do not saturate with oil. Sprinkle the seasoning into both bowls and toss to coat. Place on a shallow parchment lined baking dish or cookie sheet. Roast for 40 minutes at 400º

** For roasting beets – wash the beets, cutting the tips off each end. Drizzle a tiny amount of olive oil on the beets and sprinkle with salt and pepper. Wrap the beets in aluminum foil and place in a baking pan. Bake at 400º for 40 minutes for medium size or one hour for large beets. After, unwrap the foil and cool. The skins will peel off easily.

Growing up, I didn’t have the stereotypical Greek family that has been portrayed in films and television. I don’t have eighty cousins or a father who roasted lamb on a spit. We were a small family and we didn’t have anyone close by to celebrate holidays with.

My mother’s parents lived in Athens, and she had only one sister who’d never had any children.

My dad’s father died when I was three, and after that, my father’s mother moved back and forth between Myteleni and New York. My dad only had one brother who was a merchant marine and never married.

So, my two sisters and I have no first cousins—none. My dad had some cousins in New Jersey and Pennsylvania, but no one in my mother’s family ever left Greece.

When the holidays came, my mom would cook and bake for days, use the good china and set a beautiful table, but it was the same five of us that sat for dinner every evening. I thought nothing of this at the time because I knew nothing else, and Mom always made the day special. For Thanksgiving, we would watch the Macy’s Thanksgiving Day parade on TV and later have a traditional American meal, with a few Greek appetizers thrown into the mix. Later, we would wait for It’s a Wonderful Life to come on the TV and we would all watch it. This was before the days of blue ray players and DVRs. If we wanted to watch a show or a movie, we had to wait until it aired. Imagine that!

Every year, my mother made the same stuffing, and we waited all year for it. Thanksgiving wouldn’t be Thanksgiving without my mom’s chestnut stuffing. It doesn’t have too many ingredients, but peeling the chestnuts can be a bit labor intensive. I have to say, though, it’s worth every bit of effort.

For the last thirty years, Thanksgiving has become my holiday to host. The dynamics of our family have changed, and our gatherings are much larger. I have two daughters, my one sister also has two daughters and my other sister has a son and a daughter. Our children are lucky to each have four first cousins on just my side of the family, not to mention the four cousins on their father’s side. Not wanting anyone to have to choose where they would go for Thanksgiving, I invite everyone! All extended family and sibling in-laws. There were years where I had close to thirty people over.

I may be the one who has made the stuffing for years now, but the “children” (they’re all over 18 now) never refer to it as Mom’s stuffing or Aunt Effie’s stuffing. Nope! It’s Yiayia’s stuffing. And that’s as it should be.

In a large sauté pan, melt the unsalted butter. Add the celery and onions and sauté until tender.

In the meantime, cut the crusts off the unsliced bread and cut into cube. Place the cubed bread in a large mixing bowl. Sprinkle ½ teaspoon of salt and a few dashes of pepper to the bread and toss, mixing evenly. Pour the warmed milk over the bread and gently mix. Add the celery/onion mixture, distributing the excess butter over the bread. Add the chestnuts and mix one last time. Spoon into a baking dish and bake for 1 – 1½ hours. When the top crusts over, lay tin foil on top to prevent further browning, but do not seal.

*If you choose to add the stuffing inside your turkey, please make sure the internal temperature all the way into the center of the stuffing is 165º.

Comfort food—nothing soothes the soul better. For me, comfort food is anything my mom made for me growing up when I was under the weather, or needed warmth. For my children, it was the same—Yiayia’s cooking was what they craved. Yiayia is no longer with us, but her spirit lives on in her wise words, the traditions she taught us, the advice that still rings in our ears, and in her delectable food.

This lemon chicken and potato meal has always been one that I’ve made in my home, just as my mom had. Yet, when my children would have it at her home, they would savor every bite. I think this might have been for two reasons. First reason – her gas stove. Even though I would cook the food exactly the way she did, it never came out quite the same. The natural juices came out pulpier when she made it. She never used chicken broth – only water. I add the chicken broth in hopes of replicating the flavor she achieved with her gas stove. Don’t get me wrong. Mine comes out tasty. We all enjoy it. But it’s not exactly like my mom’s. Which brings me to the second reason. I call it the Yiayia Effect. Everything she did or made was special to her grandchildren—even more so now that they only have their memories to draw on. And I suppose this is why certain foods are comfort foods. Not only for the delicious flavor but also for how they make us feel inside.